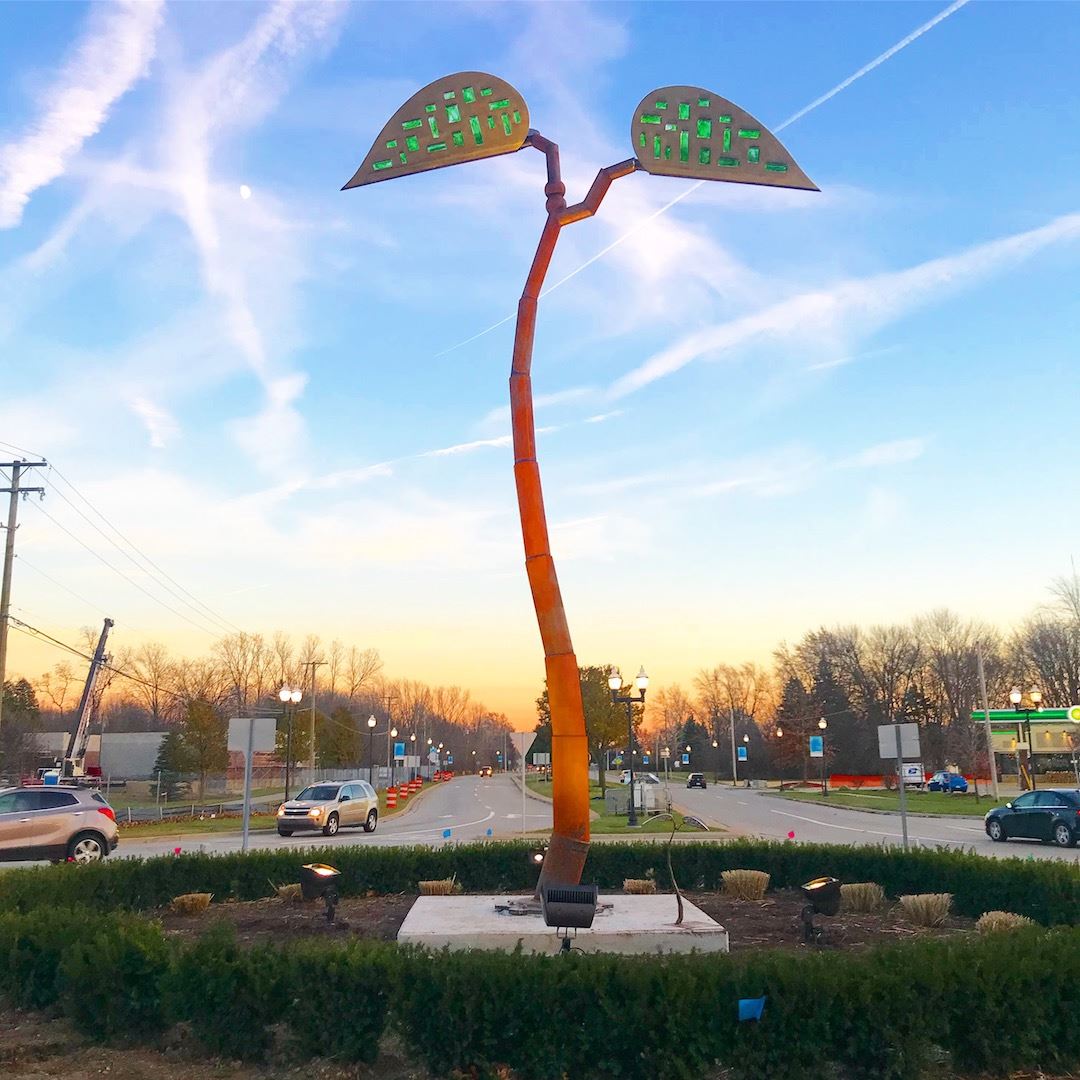 Sterling Heights’ first piece of public art under its newly revamped Public Art Plan, dubbed “The Seed,” was installed in November 2017. “The Seed” was commissioned by highly acclaimed local artists Erik and Israel Nordin of the Detroit Design Center.

The City of Sterling Heights re-launched its Public Art Program in 2017, building on decades of support and investment for public art around the City. “The Seed” was installed in the traffic circle at Dodge Park and Utica Roads, a very prominent and visible location for maximum public viewing opportunities. The installation of the art came as a result of months of planning by the City’s Arts Commission and Community Relations Department.

“The Seed” is 26-feet tall, the tallest sculpture to-date to come out of the Detroit Design Center (tied only with the “Menorah in the D” piece in Detroit). “The Seed” is made with steel and blown glass that will patina over time to create a unique and beautiful look. The leaves of the piece are filled with a varying gradient of green glass, which when lit at night, will look fantastic to viewers.

Erik and Israel Nordin aren’t just local Detroit artists – they’re Sterling Heights natives. The brothers grew up in Sterling Heights along with four other siblings and their parents; their mother, Elayne Nordin, was a former member of the City’s Arts Commission.  For the past 20 years, the Detroit Design Center has been commissioned and completed similar unique public art projects in other Metropolitan Detroit communities, including Grosse Point Shores, Royal Oak, Harrison Township, Brighton, the city of Detroit, as well as private clients such as Sinai Grace Hospital, Quicken Loans, the Innovation Institute of Henry Ford and the University of Michigan.

Community Relations Director Bridget Kozlowski said the idea for “The Seed” was born out of an initial meeting of the Arts Commission and Erik Nordin this summer, when commission members expressed their interest in the newly commissioned art representing natural elements. Kozlowski said the goal behind the piece was to share the City’s vision for Sterling Heights as a place to recreate and enjoy the outdoors.

“The voters’ support of the Recreating Recreation plan in 2016 really gave the City clear direction for the future,” Kozlowski said. “In conversations with residents and members of the Arts Commission, we know Dodge Park, the Clinton River and the myriad of recreation opportunities are the mainstays of why people choose to live or stay in Sterling Heights. This art is meant to represent the investment in our natural assets.”

Mayor Michael C. Taylor said the City Council is supportive of the Public Art Plan as artwork is an element of placemaking proven to result in positive economic growth for both residents and businesses.

“Public art is not only an investment in aesthetics and beautification of Sterling Heights, it also has long-term impacts on the City as a whole,” Taylor said. “Public art is an element of the City’s 2030 Visioning plan, and I’m excited to see it come to life once again. Sterling Heights’ historic investment in art has produced a collection unmatched by any other Metro Detroit community.”

The plaque describing the artwork, to be installed in Spring 2018, will read:

“A single idea can change the world… it can inspire and change the way we think. All we have to do is plant a seed.”

“Each citizen of this great city can appreciate what their seed can become.
This sculpture is dedicated to our Sterling Heights residents for their
support of the Recreating Recreation initiative, a truly transformative vision
of the City’s future that will benefit generations to come.
Supported by the Sterling Heights City Council, Arts Commission and Staff.

Designed and Created by Erik and Israel Nordin — 2017

THE SEED - A large scale sculpture created for the city of Sterling Heights, Michigan from Detroit Design Center on Vimeo.