The Sterling Heights City Council adopted the Fiscal Year 2020/21 Budget on June 16, 2020.  To view a complete copy of the adopted budget, please click on the image to the right. 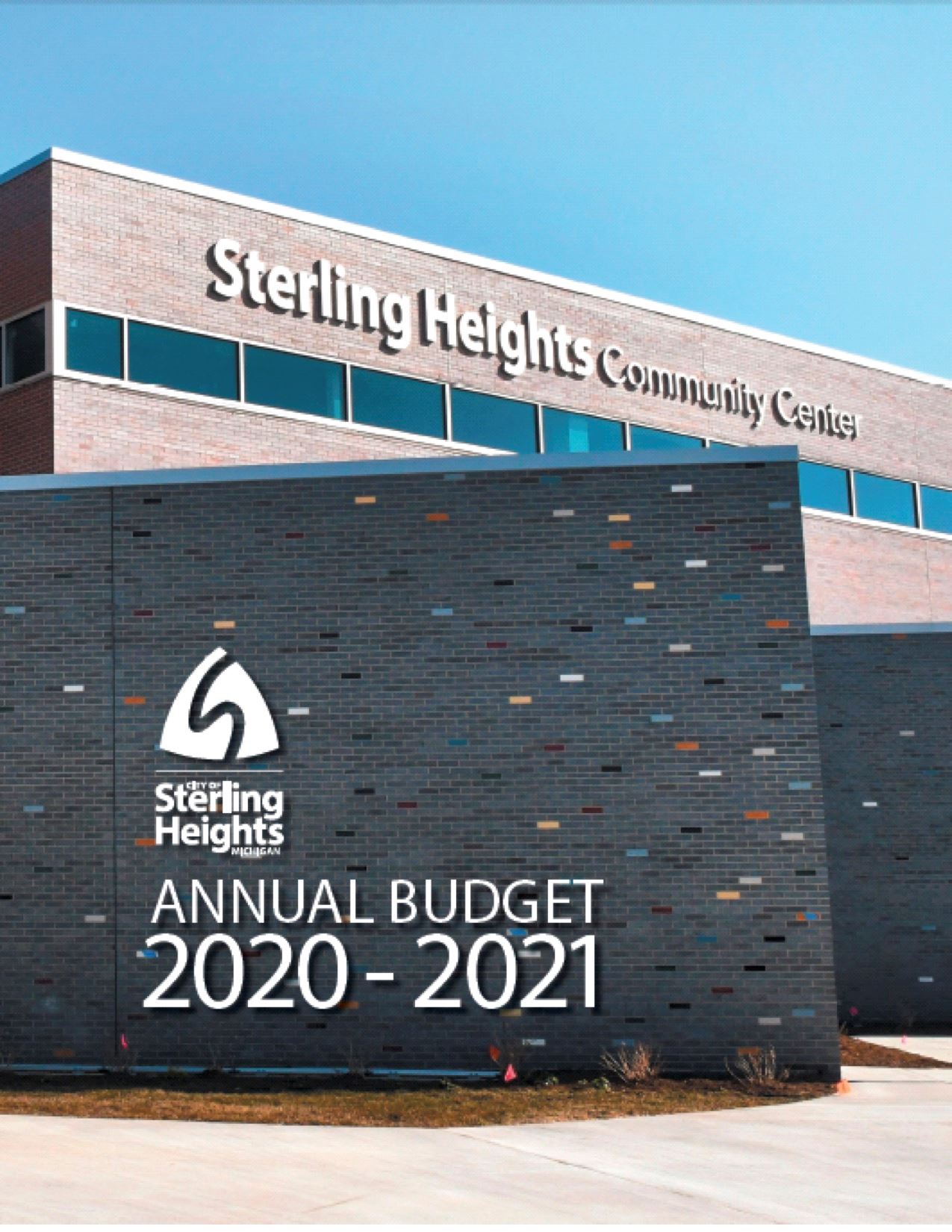 Low Tax Rate
For the fiscal year beginning July 1, the City budget totals $213.9 million – a decrease of $55.5 million or 20.6 percent below last year. There is no increase in the total City millage rate of 16.2069 mills, and the average resident will pay only $104 per month in City taxes. The City tax rate continues to be lower than most cities in Michigan and is one of the lowest in Macomb County.

Expected Revenue Reductions
Expected reductions in state shared revenue, state road funding, building permit revenue, court fines and interest income resulting from the COVID-19 crisis have been factored into the budget. As a result, the budget provides funding for only the highest priority needs, eliminating millions of dollars in departmental requests in order to align expenditures with expected reductions in revenues.

Despite projected reductions in road funding from the state of Michigan of over $2.4 million over the next three years, the 2020/21 budget funds a total of $6.1 million toward a total investment of $23.6 million in major road reconstruction during the 2020 construction season. The following projects are funded in the adopted budget:

In addition, as a direct result of the renewal of the Safe Streets millage, the budget includes a $5 million investment in neighborhood streets that will fund sectional repairs and full reconstruction of 26 local streets.

The 2020/21 budget funds the final pieces of a massive investment in quality of life services, including numerous parks and recreation improvements across the City, not the least of which is the City’s new state-of-the-art community center. The Clinton River landings and launches, along with the anticipated opening of the City’s first dog park, are proving to be transformational.  We expect the excitement to return once the amenities closed due to the COVID-19 crisis can reopen safely.

The budget also focuses on continuing improvements to our aging facilities. The new Public Works facility broke ground in 2019, along with the much anticipated renovation of the City Center campus facilities. The renovated 41-A District Court, Library, Police Station and City Hall will be more welcoming to the general public and include improved customer service amenities.

The budget also continues to invest in public safety, including the replacement of a 20-year old fire engine and much needed repairs to the fire training tower. Funds are also budgeted to replace 19 police vehicles, and due to obsolescence, all in-car cameras, computers and modems for police vehicles will be replaced over the next three years.

City Manager Statement
According to City Manager, Mark Vanderpool,  “While the next year is likely to be filled with many unknowns, Sterling Heights is well positioned financially. The approved budget helps to sustain the City’s financial future by funding only the most critical operational and capital needs.”