(Ulmus americana) is found in river floodplains and disturbed sites such as old fields, roadsides and pastures. An ideal street tree that was widely planted because of its shade and graceful form. Dutch Elm disease affects this tree.

(Quercus rubra) is relatively fast growing and long-lived (300 plus years). Acorns mature in autumn of second season. Red oak is an important tree for landscaping parks and spacious lawns.

(Morus rubra) has smooth and variously lobed leaves on the same tree. Fruits ripen in July and are quickly eaten by birds. The White Mulberry was introduced from China to help establish a silkworm industry in America.

(Acer nigrum) is characteristic of river floodplains and bottomlands. This tree is highly shade-tolerant and slow growing. It is reported to produce more and a better grade of maple syrup than the sugar maple. 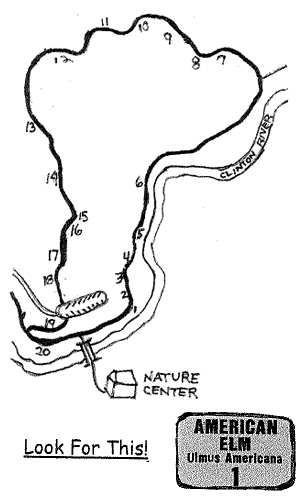 (Ostrya virginiana) has fruit clusters resembling hops. It is also known as ironwood because of its extremely hard wood. Pioneers made prying poles, levers, sleigh runners, wagon tongues, wheel rims and spokes from this tree.

(Salix nigra) is found along stream and riverbanks. Trees thrive at or slightly above water level where they tolerate flooding and silting. Wood is used for crates, pulpwood, artificial limbs and polo balls.

(Acer saccharinum) is typical of stream banks and river flood plains. This species is shade-intolerant and fast growing. A popular yard tree because of its foliage, fast growth and adaptability to a variety of soils.

(Juglans cinerea) is also known as White Walnut. Nuts are oblong and the husks contain an orange-yellow dye once used for coloring homespun clothing. Boiling down the sap can make a sweet syrup.

(Sassafras albidum) has three distinct leaf forms on the same tree. This southern species grows here at the northern limit of its range. Oil distilled from the bark of its roots and trunk is used to flavor candy, medicine, root beer, tobacco and soap.

(Tilia americana) flowers bloom in June and July and yield an excellent honey. Native Americans made rope from the bark and young stems. Wood is highly valued for carving.

(Carya cordiformis) ranges farther north than any other kind of hickory. Squirrels eat the nuts, despite their bitter taste. Wood is reported to be the best fuel for giving meats the true “hickory smoked” flavor.

(Celtis occidentalis) is characteristic of stream banks, river floodplains and moist fertile bottomlands with calcareous soil. Dark purple fruits ripen in September and October and are eaten by birds. “Witches Broom” is a disease that often affects this species.

(Fagus grandifolia) is very shade-tolerant, slow growing and long-lived (300-400 years). Edible nuts ripen in October and are enclosed in a bristly husk. Beech is highly susceptible to fire due to its thin bark and shallow roots.

(Juglans nigra) leaves appear late in spring and are shed in early autumn. Nuts ripen in early October and are distributed throughout the woods by squirrels. Wood is prized for furniture, veneer, interior trim and gun stocks.

(Asimina triloba) grows in small groups or dense thickets from root sprouts. This southern species exists here at the northernmost limit of its range. Edible fruits ripen to a dark brown in late September.

(Acer negundo) is also known as Ash-leaf Maple. This member of the maple family is an aggressive colonizer of disturbed, open sites. Bright red boxelder bugs feed on the leaves and can be a nuisance to homeowners.