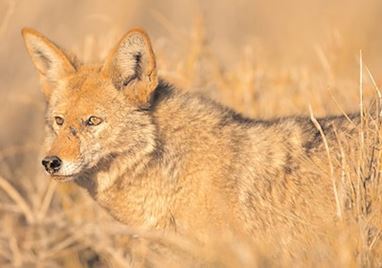 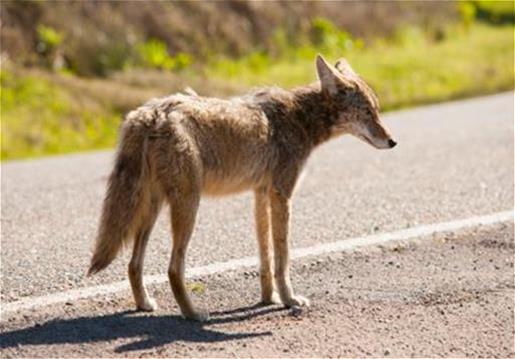 Coyotes are found in every county in Michigan. They are becoming increasingly more common in suburban and urban areas throughout the country. Coyotes are moving into more non-traditional areas, like metropolitan areas, as a result of development encroaching on their natural habitats. Coyotes do remarkably well at finding ways to live near humans without being detected.

Our Sterling Heights Animal Control Officers have approached the coyotes on runs and in every instance, the coyotes have acted normal, that is they proceeded to get up and run away from the humans. The officers have not observed any atypical behavior that would lead to concern.

From a distance, coyotes can be difficult to distinguish from a medium-sized German Shepherd dog. Coyotes weigh between 25 - 40 pounds and carry their bushy, black tipped tail downward or below the level of their back. Coyotes can often live six to eight years in the wild.

People are most likely to see coyotes during their breeding period, which occurs in Michigan from mid-January through March. As fall approaches, pups begin dispersing from the den site to establish home ranges of their own. These young dispersing animals sometimes wander into urban areas. Coyotes are active day and night, however, activity peaks near sunrise and sunset.

Coyotes are opportunistic and will eat almost anything available. Small mammals such as mice, voles, rabbits and squirrels are preferred foods in suburban and urban areas. Birds, insects, fruits, berries, frogs, snakes, carrion, plants and seeds round out their diet. In areas with high deer numbers, carrion resulting from vehicle/deer collisions, natural causes and crippling losses is an important source of food. In urban areas, neighborhoods and residential areas, coyotes are attracted to garbage, garden vegetables and pet food. They will also prey on unattended small dogs and cats if opportunities exist. Coyotes generally feed at night.

Coyotes are generally timid and shy animals that tend to steer clear of any potential danger and thus, pose little threat to humans. While there has been no documented injuries to humans from coyotes in Michigan, some western states have reported coyote attacks on human beings. Bites from snakes, rodents, and domestic dogs are a far greater possibility than coyote bites, according to public health authorities. However, coyotes that are fed become accustomed to people and present a human safety risk. People should NEVER intentionally feed or attempt to tame coyotes. It is in the best interest of both coyotes and humans if coyotes retain their instinctive fear of people. The following important points can help minimize potential conflicts with coyotes:

The Michigan Department of Natural Resources (DNR), Macomb County Health Department, the city of Sterling Heights and other control agencies do not recommend trapping because the required traps are too large and can pose a threat to children and small pets. Trapping on public property is not permitted. However, there are agencies that will trap on private property.